I have just finished reading the anthology Resistance and Hope: Essays By Disabled People. The book's other subtitle (which I love) is "Crip Wisdom for the People." This volume is edited by Alice Wong and is a part of the Disability Visibility Project. As I have found is oftentimes the case with anthologies which emanate from the disability community, the quality of writing will vary a great deal. Some pieces simply seemed like exercises in which the writer recited the list of politically relevant identity groups to which they belonged and then sought to promote their personal projects. Other pieces were excellent. The three best pieces in the anthology were written by Shain M. Neumeier, Lydia X. Z. Brown, and Victoria Rodriguez-Roldan. I'm proud to call all of these individuals personal friends of mine, but that is not what made their work stand out to me. It was the extent to which they were able to move beyond the politics of the personal to make their work speak with urgency to the issues facing disabled individuals and disability communities now. I would also add that all three individuals are youth liberationists. Their politics is grounded in recognizing the worth of all persons and working to create liberation from there.

Brown's piece, entitled "Rebel - Don't Be Palatable: Resisting Co-optation and Fighting for the World We Want" focuses on the ways in which our movements themselves can be draining, discriminatory, exclusionary, and oppressive. It asks the reader to think about the ways in which activist communities to which they may belong all too often reenact the same rituals of devaluation and degradation that take place within so many other spaces within our society at large. Essentially, it is problematic to treat people as disposable simply because they may have behaved inappropriately at some point in time or shared an opinion with which one or the wider movement disagrees. And yet that is so often the course of action that our movement circles take.

The absolute highlight of the book for me was Shain M. Neumeier's article "Back Into the Fires That Forged Us." Neumeier has a way of speaking to the heart of an issue in universal terms while bringing out unique aspects and connections among issues that others may not have noticed before. The ways in which Neumeier connects notions of authoritarianism, cruelty, and the criminalization of poverty and disability under the aegis of social Darwinism is impressive and thought-provoking. Perhaps most impressive of all, despite the piece's deep dive into such disheartening territory, the essay manages to end on a meaningfully hopeful and optimistic note. Neumeier's words are inspiring in the best possible way.

The last piece in the book is by comedian Maysoon Zayid and in it she says that, prior to the Trump era, the disability community had "focused less on survival and more on battling against ableist language and for the right to run out of spoons." I do not think that this is a fair summation of all of the disability activist work I have seen going on prior to the Trump era, but there is a grain of truth in it. The best pieces in this volume speak to what is truly important in reference to disability rights. 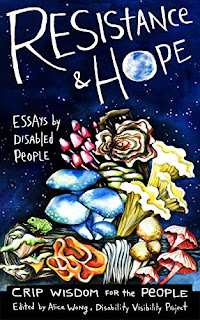